In this week’s lessons, we have been exploring the challenges of reconstructing the past from fragments of archaeological evidence. We looked at some of the striking reconstructions of the palace at Knossos which Sir Arthur Evans undertook; these have been a big part of what has made visiting and viewing the ancient site so alluring and exciting. We discussed how some of the cultural assumptions Arthur Evans made heavily influenced his work when rebuilding the palace. 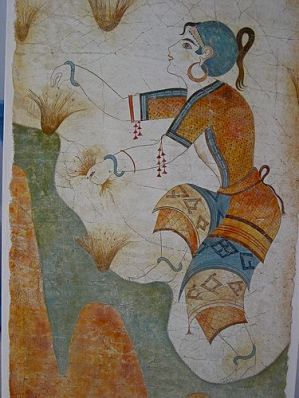 A famous example of this is the fresco called the “Prince of the Lilies”, which actually seems to have been incorrectly constructed from fragments to fit with Evans’ imagination of what the Minoan Civilisation might have been like. You can read more about the controversy of the Prince of the Lilies mural here.

In order to get an idea of the difficult task archaeologists face when attempting to piece together the past, the groups were given the challenge of completing jigsaws of Minoan frescoes at their tables, without being able to see what the final image looked like!

The groups made very impressive progress on their jigsaws, but were also surprised to see the actual images, and how they differed from the images they thought they might be creating.

We also translated chapter three, detailing Jupiter flooding the world, and looked at subjects and objects in Latin.